We now offer Afternoon Tea at the farm – but where did it originate? 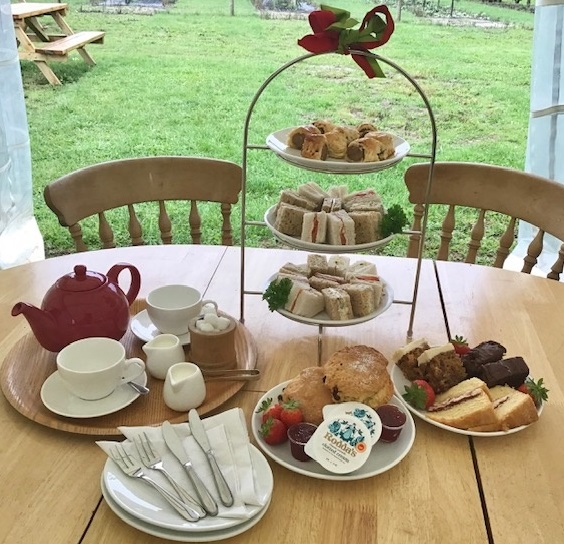 The History of the Afternoon Tea

The custom of drinking tea dates back to the third millennium BC in China and it became popularised in England during the 1660s by King Charles II and his wife, Catherine de Braganza.

The concept of Afternoon Tea was introduced in England by Anna, the seventh Duchess of Bedford, in the year 1840. The Duchess would become hungry around four o’clock in the afternoon. The evening meal in her household was served fashionably late at eight o’clock, therefore leaving a long period of time between lunch and dinner. The Duchess asked that a tray of tea, bread and butter with a filling in between (introduced by the Earl of Sandwich sometime earlier), and cake be brought to her room during the late afternoon. This became the Duchess’s daily ritual and soon she began inviting friends to join her.

Afternoon tea became a fashionable social event; during the 1880’s upper-class and society women would change into long gowns, gloves and hats for their afternoon tea which was usually served in the drawing room between four and five o’clock.

Traditional afternoon tea consists of a selection of dainty sandwiches, scones served with clotted cream and preserve, and cakes & pastries. We’ve taken the liberty of adding some of our homemade mini sausage rolls too!

Why not enjoy Afternoon Tea at Cammas Hall? Click here to make a reservation; bring along family and friends and consider the great scone conundrum – cream or jam first?!

We use cookies to ensure that we give you the best experience on our website. If you continue to use this site we will assume that you are happy with it.OKRead More